Dear readers, I apologize for not posting for a while.

I have been reflecting on how I celebrated Christmas when I lived in Senegal and what the holiday means to me now.

Growing up, the month of December was full of anticipation and Christmas Eve was one of the most exciting days of the year. In fact, as a child I believed that Christmas was on December 24th. As a teenager, my friends and I spent months preparing for our annual Christmas Eve bash—one of the many parties held in neighborhoods by different age groups. We wrote letters of support and spent weeks walking from house to house reminding the adults that it was time for their financial contribution―as if they owed it to us. We meticulously created invitations and selected those cool peers who would receive one and those not worthy of our precious handmade cards. On the day of the party we roamed the neighbordood borrowing tables and chairs, a stereo, and audio cassettes (Yes, I am conscious that I am giving away my age!). We also prepared a precise menu, making sure the most delicious and most consistent food was the one served toward the end of the party ( almost at dawn), to entice guests to stay longer because many peers were invited to more than one party (I am winking at my fellow Senegalese readers who might recognize themselves in these memories.). I made sure I was the perfect child because my mother would use the threat of not letting me attend the bash to remind me that she was the one in control. Finally, but most importantly, we spent weeks ruminating about what to wear on that glorious night. The central market in our town buzzed with young adults, mostly women, who waited anxiously in the shops where tailors spent countless sleepless nights sewing. I witnessed women crying because the tailor did not execute their design properly, or that he simply did not have the time to make the outfit because he had taken far too many orders than he could honor. And of course, there was the hair. My sisters and I spent days and nights putting in tiny braids, sewing weaves, or subjecting our hair to several stages of straightening with harsh chemicals. 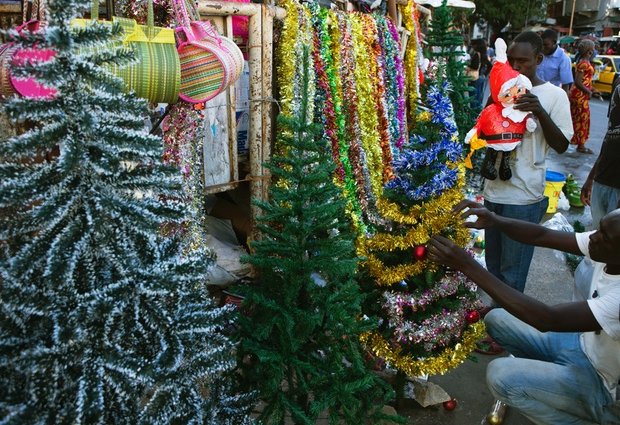 This frenzy and anticipation of Christmas in a country that is predominantly Muslim would not make sense to many outside of Senegal. On Christmas day, both Christians and Muslims said “Joyeux Noel” to each other and kissed on the cheeks. In my direct family we did not have a Christmas tree but my father often gave us a collective gift such as a new television set.  Also at one of our neighbors’ house, there was always a plastic Christmas tree in the living-room and his children received individual gifts.  One of my uncles also held a Christmas Eve get-together.  Almost everyone on my mom’s side of the family convened at his house. After partying all night, we had a family reunion on Christmas Day during which stories of the past were revived and broken relationships were mended. In the years after my sisters and I left for college, we would come home during the holidays and spend Christmas Eve in a Réveillon en Famille, eating delicious meals and watching movies that chronicled the birth of Jesus Christ, on national television. We would also spend a good part of the night reminiscing on those past Christmas Eves and telling jokes about failed outfits and hairdos.

In the United States, I often feel like I do not have the right to claim Christmas because doing so has many implications both religiously and culturally. American culture is too focused on difference and there is a huge emphasis on division whether on the basis of religion, class, race, gender, etc. I refrain from saying that I love Christmas because that might allow people to judge my religious convictions. But not doing so also emphasizes my difference and makes me vulnerable to exclusion. Before I got married and had children, I spent Christmas Day at my host parents’ home. When I moved away and going “home” to my host family became less possible, Christmas has become one of the loneliest holidays for our family. We have been living in our current community for almost seven years, but we have been invited to someone’s home for Christmas only once, and by friends who are actually an interfaith couple. Our next door neighbors are both pastors and after several failed attempts to have us join their church, I doubt they would ever consider inviting us for anything else. It is also possible that people do not invite us for Christmas because they fear they would offend our Muslim beliefs. In previous years, we had a Christmas tree with gifts under it. But as our children are growing and becoming conscious of their identity, we worry about religious confusion and try to keep Christmas low key, especially since Muslim holidays are not paid much attention in America. We still give our children gifts because we feel it is unfair to them to not participate in the cultural aspect of the holiday. It is just too hard to explain to young children why the generous chubby white man carried by flying reindeer, skipped their house during his gift-giving voyage around the world.

Almost every year, we attend a Christmas carol sing-along organized by a colleague who loves to bring people together. But every time I sit there singing about Santa Claus and his reindeer, I realize that Christmas does not mean the same to me anymore. I sometimes feel odd and needing to explain my presence. Nevertheless, I still love Christmas for the wonderful memories of home it brings every year.

The pictures above are of downtown Dakar during the holiday season.

6 thoughts on “Christmas Then and Now”

Life in the hyphenated space between Senegal & America